Electrolysis - this redox process, which takes place at the electrodes during then electric current is passed through the melt or solution.

Electrolysis is another way to get pure metals and nonmetals. In addition, the electrolysis can be done out at home. Need a current source, two electrodes (kinds of electrodes, any cases these processes, to be discussed later) and, of course, the electrolyte. The electrolyte is a solution that conducts electric current.

Electrode, the positively charged, is anode. The electrode is charged negatively, is cathode. During electrolysis, oxidation of the anode (it dissolves) and the restoration of the cathode. Therefore, the anode should be taken it dissolution did not affect for the chemical process occurring in solution or melt. Such an anode is called an inert electrode. As the inert anode can be graphite (carbon) or platinum.
As the cathode, you can take the metal plate (it will not dissolve). Suitable copper, brass, carbon (or graphite), zinc, iron, aluminum, stainless steel.

At home, of those substances that are present in almost everyone, you can easily get, for example, oxygen, hydrogen, chlorine, copper, sulfur, and a weak acid or alkali!
But be careful with chlorine - this gas is poisonous!!

The first experience will conduct with the aim of producing hydrogen and oxygen.

Make the electrolyte from the solution of food soda (also, you can take soda ash), put the electrodes in it and turn on the power supply. As soon as the current will go through the solution immediately becomes visible gas bubbles, which are formed at the electrodes: at the "+" will be released oxygen, at the "-" hydrogen

This is becouse, negative ions OH- is the accumulation near the anode "+" and the reduction of oxygen, and near the cathode "-" accumulate ions of the alkali metal contained in solution of soda ash (Na2CO3) with a positive charge (Na+) and simultaneous recovery of hydrogen. The recovery of sodium ions to pure metal (Na) does not occur, becouse the metal sodium is in the left part of the hydrogen in the range of voltages of the metals.

The next experience in electrolysis will get pure copper (Cu). To do this we need the solution of copper sulfate CuSO4, which contains dissolved copper. Copper is after hydrogen in the range of voltages of metals, so it will stand out on the electrode.

Prepare a solution of copper sulphate, put in it the electrodes and turn on the power supply. As in the previous experience with solution of soda ash, anode "+" will be restor oxygen. At the same time, the cathode "-" will be cover dark red layer (copper- Cu), which is recovered from the solution to the pure metal. 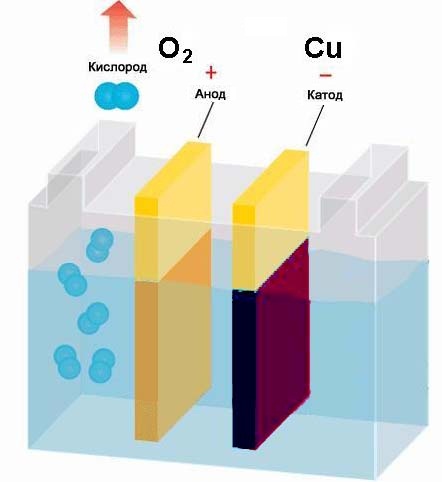 We had 2 experiences of the electrolysis of solutions and can sum up the result:
The current passing through the solution on the positive electrode - the anode - restored negatively charged ions (in our case oxygen). Negatively charged ions are called anions. On the negative electrode - the cathode - reversed positive ions (in this case hydrogen and copper). Positive ions are called cations.

Will have another experience in electrolysis. This time we will pass current through a solution of sodium chloride (NaCl). But I have to warn you, this electrolysis should be carried out in a well-ventilated room, as emitted from a solution of pure gas - chlorine (Cl2) is very toxic. if you want to collect this gas (or other gas), you can use the following scheme.

Electrolysis of food salt solution. The scheme to get a gas

So, let's begin. Prepare a solution of sodium chloride (NaCl). The positive pole of the power supply connect with inert electrode (for example graphite rod), the negative pole can be any suitable material, conductive current. Put in solution the electrodes and turn on the power supply. After a few seconds, you can already feel the unpleasant smell of chlorine (is chlorine!). Do not overdo it with the smell! Chlorine is released in the form of small bubbles at the anode ("+"). The longer it will take to process of electrolysis, the more the chlorine concentration will be near the electrolyte. If you collect chlorine in a test tube or jar (chlorine is heavier than air, it will be found at the bottom), do not try to "sniff" its in the Bank - can badly poisoned! (Article about chlorine). So, pure chlorine gas is recovering at the anode. At the cathode from a solution recovering pure hydrogen (H2) and to recover H2 and to recover sodium, which will immediately react with water and form caustic soda.

When electrolysis of melts the ions of the substance that undergoes electrolysis are involved in the process. For example, if a molten salt (NaCl) is electrolyzed, the same gas - chlorine-will be released at the anode, but the pure metal - sodium (Na) will be restored at the cathode instead of hydrogen. This is the method used in industry to get metallic sodium and other alkaline metals. The same way used to get other alkali metals (potassium (K), lithium (Li), calcium (Ca)) with conducting a current through the melts of their salts.