D. I. Mendeleev was identified compound as a reaction, "in which two substances give one". An example of a chemical reactions compounds can be heated powders of iron and sulfur, - this forms a sulfide of iron: Fe+S=FeS.The reactions of compounds include combustion processes simple substances (sulphur, phosphorus, carbon,...) in the air. For example, carbon burns in air With C+O2=CO2 (of course this reaction proceeds gradually, first formed carbon monoxide, CO). The combustion reaction is always accompanied by heat are exothermic.

In the reactions of the other two types, the number of reactants is equal to the number of products. If you interact a simple substance and complex - this chemical reaction is called a chemical substitution reaction: for example, if drop a steel nail in a copper sulfate solution, we will get vitriol (iron supplanted copper from its salts) Fe+CuSO4= FeSO4+Cu.

The reaction between two complex substances, in which they exchange their parts, refer to the chemical reactions exchange. A large number flows in aqueous solutions. An example, a chemical reaction can serve to neutralize acid by alkali: NaOH+HCl=NaCl+H2O. Here reagents (substances, standing left) ion of hydrogen from the substance HCl is exchanged with the sodium ion of the substance NaOH, resulting in a solution of salt in water.

Signs of chemical reactions. It is possible to know, was whether a chemical reaction between reactants or not:
- Color change (for example, light iron covered in moist air brownish tinged oxide iron is a chemical reaction interaction of iron with oxygen).
- Precipitation, for example, if in a lime solution (a solution of calcium hydroxide) we can get if to pass the carbon dioxide in a solution of calcium hydroxide.
- get a gas (for example, if drop citric acid to baking soda, it will get out carbon dioxide).
- The weak-disturbed formation of substances (reactions in which one of the products of the reaction is water).
- Glow solution.

An example of a luminescence of the solution may be a reaction using a solution lyuminola (luminal is a complex chemical substance which can emit light by chemical reactions).

Redox reaction - - are a special class of chemical reactions. Their characteristic feature is the change in oxidation state of two or more atoms: one atom loss of electrons and the another atom gets electrons.
Complex substances reduce their oxidation are oxidizing, and to increase the levels of oxidation are reductants. For example:
2Na + Cl2 = 2NaCl,
- oxidizer is chlorine (he attaches to himself electrons), and the reductant - sodium (it gives up electrons).

Dangerous chemical reactions :"BOMB in SINK"- funny or not?!

There are some chemical reactions that occur spontaneously upon reactants are mixing. This created quite a dangerous mixture that could explode, ignite or poison. Here is one of them!
In some American and British hospitals observed a strange phenomenon. From time to time a sound was heard like gunshots from the sinks, and in one case exploded drain tube. Fortunately, no one was hurt. The investigation revealed that the culprit was very weak (0,01%) solution of sodium azide NaN3, which is used as a physiological solutions.

Excess azide solution for many months or even years was poured into the sink - sometimes up to 2 litres a day.

By itself, sodium azide is salt of azidovudine acid HN3 - is does not exploded. However, azides of heavy metals (copper, silver, mercury, lead and others) - very unstable crystalline compounds, that are explode in friction with impact of heat or light. An explosion can occur even under water! Lead azide Pb(N3)2 is used as an initiating explosive, which is used to undermine the main mass of explosives. It is enough to just two dozen milligrams Pb(N3)2. This substance is more explosive, than nitroglycerine, and the velocity of detonation (propagation of the blast wave) reaches 45 km/s - 10 times greater than that of TNT.

But where in the clinics could take azides of heavy metals? In all cases, the drain pipes under sinks were made of copper or brass (such tubing is easily bent, especially after heating, so they are easy to install in the drain system). Solution of sodium azide that is Poured in the sink, passing through such tubes, gradually reacted to their surface, forming azide copper. It needs to change a tube on the plastic. When in one of the clinics held such a change, it turned out that shot of the copper tube is heavily clogged solid substance. Experts, who were engaged in "mine", for not to risk, undermined these tubes in place, putting them in a metal tank mass 1 ton. Explosion was so strong that moved the tank a few inches!

Doctors are not very interested in the nature of chemical reactions leading to the formation of an explosive. In the chemical literature also failed to find the description of this process. But it can be assumed, on the basis of the strong oxidizing properties of HN3, what was this reaction: anion N-3, oxidizing copper, formed one molecule of N2 and nitrogen atom, which became part of the ammonia. This corresponds to the reaction equation: 3NaN3+Cu+3Н2О→ Cu(N3)2+3NaOH+N2+NH3.

With the danger of formation of bombs in the sink has to be considered by everyone who deals with soluble aside metals, including chemists, because azides are used to obtain high-purity nitrogen in organic synthesis, as a blowing agent (foaming agent for the production of gas-filled materials: foams, porous rubber, etc.,). In all cases it is necessary to ensure that the drain tube was plastic.

Recently azides have found a new use in the automotive industry. In 1989, in some models of American cars appeared airbags. This pillow containing sodium azide, folded almost invisible. In a frontal collision of the electric fuse leads to very rapid decomposition of the azide: 2NaN3=2Na+3N2. 100 g of the powder emit approximately 60 liters of nitrogen, which is approximately 0.04 seconds inflate the pillow in front of the chest of the driver, thereby saving his life. 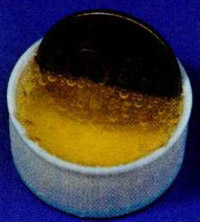