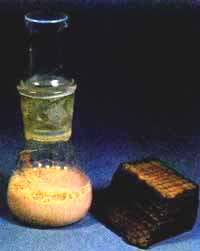 Except for complex substances like polyethylene, that are high molecular polymers, there is a class of chemicals substances of conjugated dienes.

After the polymerization of dienes, new chemical substances are formed with high-molecular structure called the caoutchouc.

Caoutchouc was already known in the late 15th century in North America. It was used by Indians for making shoes, unbreakable things and dishes. Caoutchouc was received from the juice of trees, which were called "tears of wood".

As for Europeans, caoutchouc was learned then America discovered. It is Christopher Columbus first found out about its properties and getting.

Long time the caoutchouc could not find employment in Europe. In 1823 the first was the proposed to use of the material for the manufacture of raincoats and waterproof clothing. Fabrics impregnated the caoutchouc and organic solvent, thus the fabric has become water-resistant properties. But, of course, was seen and the downside, that the fabric impregnated with caoutchouc, stuck in hot weather to the skin, and when cold – crack.

Difference between caoutchouc and rubber

Of course, the caoutchouc is distinguished from rubber. Rubber is a cross-linked polymer, which is able to straighten and re-curl in tension and mechanical force. Rubber is also cross-linked macromolecules that do not ways to crystallize when cooled and will not melt when heated. Thus rubber is a more versatile material than caoutchouc, and is able to retain its mechanical and physical properties at a wider range of temperatures.

In the early 20th century, when the first automobile, demand for rubber increased considerably. At the same time, increased demand for natural caoutchouc because at the time all rubber was made from the juice of tropical trees. For example, to get a 1 ton of rubber, it was necessary to treat nearly 3 tons of tropical trees, work at the same time employed more than 5 thousand people, and the rubber could only get through the year. Therefore, rubber and caoutchouc rubber was considered expensive material.
Only in the late 20's, russian scientist S. V. Lebedev at a chemical reaction - polymerization of butadiene-1,3 on sodium catalyst got the samples of the first sodium-butadiene synthetic caoutchouc.

One of cheap ways to obtain butadiene-1,3 is to receive it from ethyl alcohol. But only in 30's have been established industrial caoutchouc production in Russia.

In the mid 30's of the 20th century have learned to produce copolymers are polymerized 1,3-butadiene. A chemical reaction was carried out in the presence of styrene or some other chemicals. Soon as result copolymers have started to displace the caoutchouc, which previously was widely used for the production of tires.

Everyone knows that when heated, the material is able to expand. Even in physics there are the coefficients of thermal expansion for each material it is own. The extension is enable for solids, gases, liquids. But what if the temperature rose by several tens of degrees?! Fot the solids the changes we not feel (but they are!). As for high-molecular compounds, such as polymers, the change is immediately noticeable, especially if it is an elastic polymer, well able to stretch. Noticeable, but still with quite the opposite effect!

In the early 19th of century, English scientists found that the long wiring from several strips of natural caoutchouc when heated decreased (compressed), but when cooled is stretched. The experience was confirmed in mid of 19th century.

You can easily repeat the experience, hanging on the rubber band sinker. It stretched with weight. Then blow it with a hair dryer - will see how it shrinks from temperature!
Why is this happening?! To this effect, you can apply the principle of Le Chatelier, which states that if do on the system in equilibrium, it will result to changes to the equilibrium of the system, and this change will counteract the external force factors. That is, if stretch with the weight caoutchouc (system in equilibrium) to act with a hairdryer (external influence), the system goes out of equilibrium ( will be compressed), the compression is directed in the opposite direction from the force of gravity!

What happens if to deform a caoutchouc?!

The research has shown that the any thermodynamics changes in the internal energy at different positions (bending) of the caoutchouc does not occur. But if you stretch it the internal energy increases due to increase the speed of moleculesin the material.

In physics and thermodynamics it is known that the change in the velocity of the molecules of the material (caoutchouc) affects to temperature of the material. Further, the stretched caoutchouc will gradually cool down, because of the moving of molecule and release its energy, for example, to hands or to other molecules.There will be gradual alignment of energy in the material between the molecules (the entropy goes to zero). And now, when the caoutchouc took the temperature of the environment, we can take out the weight. What happens?! At the moment of removing the weight from the caoutchouc molecules have low internal energy (they lose it when stretch!). The caoutchouc has shrunk - from the point of physics work was made by it own energy, i.e. its internal energy (heat) was spent on the return to the starting position. It is natural to expect that the temperature will fall, - and what is really going on!

Rubber - as mentioned, elastomeric polymer. Its structure consists of randomly distributed long carbon chains. The attachment of the chains among themselves carried out by sulfur atoms. Carbon chains in the normal state are in a twisted form, but if you stretch the rubber, the carbon chain will untwisted.

You can spend an interesting experience with rubber and wheel. Instead of bicycle spokes in the Bicycle wheel to use rubber plaits. This wheel is suspended so it can rotate freely. In the all plaits are equally spaced out, then the sleeve of the wheel will be located strictly on its axis. Now try to heat with hot air some area of the wheel. We will see that the part of the plaits, which is hot - will contract and will shift the sleeve in its side. When happens the displacement of the center of gravity of the wheel and the wheel will unfold. After the displacement oter plaits will have action of the hot air, its will heat and the wheel will turn again. Thus, the wheel can continuously spin!

This experience confirms the fact that caoutchouc and rubber will be compressed when heated, and after cooling its will stretch!