Polycondensation is the process to form polymers are complex organic or inorganic substances, consisting of a large number of structural units linked with chemical bonds. Typically, the polymers are characterized with a very large number of links (constituting monomers). It's number can changed from hundreds to thousands and more. In this case, the characteristics of the polymer can be constancy of its properties (chemical and physical) when connect to it an additional links. There is a polymerization reaction and polycondensation - both chemical reactions lead to form the polymers, but the reaction of polycondensation is allocated a byproduct - water.

Carboxylic acid and alcohols can joined to the reaction of polycondensation like a phenols and aldehydes. If the acid and alcohol contain two functional groups in their molecules, then between them is possible polyesterification with the formation of polyester macromolecules.

For the first time the research of these unusual polymers took an American chemist Wallace Hugh Carothers in the early 20th century. But those polymers, which he had received, melted at a low temperature and to react with water. Such properties, of course, were not allowed to produce from the resulting polymers thechemical fiber. It was later discovered that when terephthalic acid react with ethylene glycol, then form polymer polyethylene terephthalate. 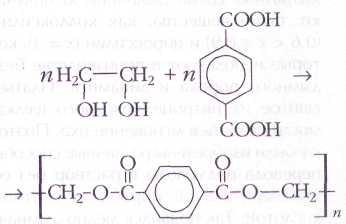 This polymer is widely used for the manufacture of durable shatterproof tableware and bottles. In addition, polyethyleneterephthalate is suitable for the production of synthetic fabrics. The first such fabric was got in the mid-20th century in England. The fabric is called "terylene" (meaning - a derivative of terephthalic acid). We have this fabric is called "Lavsan" (for honor of the laboratory of macromolecular compounds).

Here are some chemical and physical properties of Lavsan:

The melting point of the Lavsan is +260 0S. In organic solvents and water, soap and washing powders, the lavsan is not soluble. Insects don't eat it, the light does not fade. But, to get the Lavsan: first get a terephthalate polymer, and then melt it and extruded through special filters with small holes. The obtained filament is stretched, giving them greater strength.

For the production of fabrics also apply a mixture of cotton and lavsan. Such symbiosis is much more effective, the fabric is made of Lavsan and cotton is almost not wrinkled after washing and does not change its initial size.

Getting of nylon, like many other substances and components, in science were got randomly. When do chemical experiments with one of organic acid adipic and substance - hexamethylenediamine was got a complex chemical substance which is exposed to high pressure and temperature. In result of chemical reactions formed polyamide polyhexamethylenediamine - the first in the middle of the 20th century. In the same year in the United States organized the production of nylon 66. The name of this material is also unusual and consists of two words: N. Y. (new York) and Lon (London). The numbers in the title indicate the number of carbon atoms contained in the dimer, the second digit - number of carbon atoms in dicarboxylic acid.

Getting capron was utilized a few months from the new polymer polycaproamide. This substance became a product of the reaction polycondensation when heat the aminocaproic acid with pressure. Due to main constituting component aminocaproic acid the substance is got called capron. In order to give the material extra strength, nylon and capron is melted, passed through a filter, got a long thread. And when threads are cooled, they were to stretching.

Properties of polyamides are quite varied and even useful. These fibers are elastic, can withstand a decent temperature heating. Fibers made from polyamide have a high strength - the highest from known natural fibers. In addition, the polyamide material resistant to friction and wear. Dyeing it in a variety of colors, add a suitable dye to the molten polyamide material. Polyamides nylon and capron, with some way, reminiscent natural silk. Light industry found wide application for such threads to manufacture of clothing (tights, stockings), parachute fabric.

The materials are got with the basis of polyamides - different plastics, are replacing the many natural materials, including metals.

Unsaturated hydrocarbons have long been known, but only a hundred years ago learned that, for example, from the combustible gas acetylene (chemical formula C2H2 or

This polymer has several beneficial properties: resistant to moisture and strong light, in addition, when tensile strain it becomes stronger due to the reorientation of molecules in the corresponding direction. Polyacrylonitrile is widely used in manufacture of sails and flags. Also, this material is widely used for making swimwear, because the material does not lose its shape and quickly dries.